All praise and glory to the Father, Son and Holy Spirit! Mere words cannot express our thanks and praise to our Lord Jesus Christ for His unspeakable grace and gifts. He is our Wonderful Counselor. He always hears and cares for His children.  Today we praise and thank Him for the miraculous rescue of abducted Bibles for Mideast missionaries Stephan, Samuel and James. We thank every prayer warrior fasting and praying for them around the globe.

The Lord brought the three men safely back to us this evening. They are extremely tired and weak because of the stress, lack of food and sleep, and a long walk through the desert.  When we saw them, we all embraced and wept together, praising our Lord. 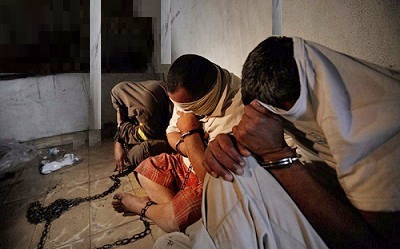 No one can tell the story better than the men themselves. Here, Pastors Stephan and Samuel, along with Evangelist James, describe what happened:

“After the worship service and Lord’s Supper, we were going back home. On the way we met somebody who smiled at us and said ‘Assalamu Alaikkum,’ which means ‘peace be with you’. We replied, and got an opportunity to speak about real peace, and the Prince of Peace, Jesus Christ. We explained to him using Bible verses about the Lord’s birth, life, ministries, crucifixion and resurrection … and the need for salvation for everyone. Accepting Him as savior and Lord is real peace, freedom and the way to heaven, we told him.

“All at once, several extremists jumped out at us with sticks and iron pipes, took the Bible from our hands by force, tore it up and threw it away. We consider the Bible precious for our life, so we begged to have it back. At that point one of them started beating us, others shouted ‘Kill them, kill them!’ They all then began beating us and shouting ‘Allahu Akbar’[an Arabic phrase translated directly as ‘Allah is Greater’ but often mistranslated as ‘God is great’—Ed.].

“A bus driving by immediately stopped, and the travellers jumped out and attacked the extremists and rescued us. They then brought us, in the bus, to the hospital and had us admitted. James was the most seriously injured.

“While in the hospital we sensed unusual movement, that someone was against us. So we asked the doctors to discharge us from the hospital. Though Brother James was not yet well enough to walk properly, we did not want to leave him alone at the hospital. He also wanted us to take him with us. So we helped him leave as well.

“We hired a taxi. It was a fake taxi. There were two other passengers also inside the taxi. As soon as the car started moving, they took out a revolver and pointed it at us. At gunpoint, they asked us many questions about our ministries and its workers. When we started screaming loudly, they tied our mouths and hands, and assaulted our heads and faces. They accused us of propagating western religion. They said we have no right to live any more on earth, and that we would be killed. Then they blindfolded us.

“About three hours passed. They took us to some other people, who we suppose were the leaders of the group. They also shouted at and assaulted us. When we fell to the ground, they kept attacking us savagely. Finally, they locked us up in a cellar.  There they untied our eyes, mouths and hands and locked the door.

“The cellar had a bad smell, reeking of dead bodies and human waste. We could see blood marks on the wall. There were no windows or ventilation, only one small door. We were sure death was near.

“We called upon our Lord Jesus. We held hands and prayed for our Lord’s will to be done; and also for the salvation of those who had attacked, abducted, assaulted and put us into the cellar. We asked the Lord to make them His witnesses. For hours and hours we prayed. We could not sleep. We did not get any food or water.  We were not aware of the day and the night. And it was so hot in that cellar. But God gave us courage to remain faithful. We were surprised that we did not ever feel the need to pass urine or have bowel movements. Our Lord protected us.

“After maybe three or four days, we clearly felt our Lord’s presence in that cellar.  A bright light flooded the room. We could smell costly perfume. We began praising and worshipping the Lord. While we prayed, we felt oil being applied to our bodies. At first we wondered whether the terrorists were doing it before taking us out for execution. But then we realized nobody else was with us! Our Lord had done it. By the anointing of the oil, all of our outer and inner injuries were healed.

“While we prayed, we noticed a small creature going through a small hole in the wall. We found a nail and used it to try to make the hole bigger. We thought maybe this would be a way to escape, so we dug deeper and further. And finally, we saw a small opening to a narrow passage.

“We praised the Lord and, one by one, entered the passage. We travelled in darkness for maybe 100 meters. We were haunted by the fear of enemies with guns, of snakes, of wild creatures, but an unspoken courage guided us. The passage ended at the desert, which is outside of the terrorists’ main compound.

“From there, we knew we had to run very fast. There was pleasant moonlight, but we had no idea which direction to go in. Then we noticed a bird circling overhead. First we thought it was a local bird, but by the way it flew and performed, we think it may have been an eagle or a falcon. And we understood it had to be from the Lord to guide us.”

The men trudged through the hot desert sun and blowing sand for hours, with temperatures over 45°C (113 °F). The next morning, clouds sheltered them some from the excessive heat.

They decided to rest under the moonlight the second night, sleeping three or four hours. While sleeping, all three had the same dream (or was it a vision?): that the Lord’s angels came and fed them with appetizing food.

The next morning, 42 hours after their escape, the men followed their bird guide up to a house they did not recognize, and watched in wonder as it stopped to peck on the door of the home. Somewhat fearful at who might open it, all were astonished to see the equally overwhelmed faces of their fellow Bibles for Mideast missionaries. All embraced in joyful amazement, praising and thanking our miracle-working Lord.

When they attempted to point out the bird that had guided them, it had vanished.