The cries of the women at the church gate came from the bottom of their hearts. “Please don’t take away our church!” they yelled. The building they were protecting was their 15-year-old church, which served 3,000 Christians in the village. It was the place these believers got married, where their children were baptized and the place where they said their last goodbyes to loved ones.

The church had become too small to host Sunday school classes and other church activities, so they had decided to add onto their building. This caused outrage from the Christians’ fellow—and non-Christian—villagers. “We decided to build an extra two stories on the church hall for church activities such as Sunday school classes, which was legal for us to do,” explains church member and deacon Bishoy during a recent a phone call. “But as soon as we started the building work, extremist Muslims attacked us. Luckily, this first attack was stopped by moderate Muslims in our village.”

But the extremists didn’t give up. When parishioners headed to church for prayers one morning, they saw radicals had illegally started building a mosque on the farmland right next to the church. “We believe they built it out of protest,” Bishoy says. “Our village already has four mosques and another one wasn’t really needed. On top of that, they built it without a foundation.” 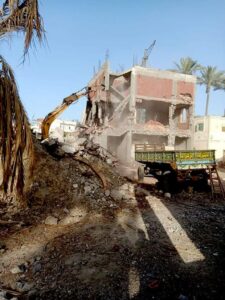 The solution the local authorities came up with was as brutal as it was incomprehensible. The mayor of the village ordered that the illegal mosque had to be demolished—but so did the legal church building. “The church lawyer made an official appeal against this order but the mayor ignored it—despite being informed—and sent 200 policemen without warning,” says Bishoy.

The congregation resisted fiercely. They stood in front of the church and pleaded for it not to be taken down [see photo below]. They showed their official papers to the police. It didn’t help.

On the contrary, shares Bishoy: “The police, and some Muslim extremists from our village that came along with them, insulted our priest and hit him in the face and chest so badly he fainted. Then they fired tear gas at us church members and attacked us physically; they even hurt women and children. They arrested 14 church members, including some women and a man whose arm was broken by the attackers. The church members [weren’t] released [until] the next day. The man with the broken arm was given no medical treatment.”

The other church members were left with no other choice than to witness their beloved church building being torn down, brick by brick. “They demolished all the concrete columns of the three stories of the church building,” Bishoy remembers. “They demolished the altar, Christian sanctuaries and destroyed Christian books.” The demolition of the church took six hours. Then the bulldozer continued to the mosque—the actual illegal building—and knocked down just one wall.

Where will the church members go to pray together now, where will they teach their children about Christ, keep their own faith alive? They don’t know. “It was the only church in our village,” says Bishoy “The nearest church now is 15 km away. It is too far if you consider that we Copts go to church multiple times a week and most of us don’t have the means to travel out of our village. Please pray for us.”