WHAT ARE THE CAPTORS OF REV LAWAN ANDIMI WAITING FOR

by GMABUZZ.COM
in CHRISTIAN NEWS, EXCLUSIVES
0 0
0 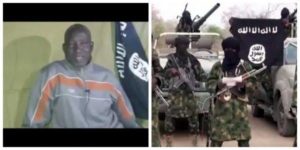 what are the captors of Rev Lawan Andimi waiting for? this is the question that has been on everyone’s mind.
According to various news and a video released by Nigerian journalist covering Boko Haram, the reverend who was abducted and taken away by the sect in a Toyota car at Adamawa state Nigeria is
healthy and well nourished by his abductor.We were also informed that he said the government should be consulted to make arrangement for his release. No one has told us the reason for his
abduction or why the dangerous sect decided to treat him with so much kindness by feeding him with what he wants to eat and a comfortable place to sleep. No one can say for sure
if his abduction was on the bases of his faith or for political reasons. All we can say for sure is Rev Lawan Andimi is a christian in the mist of Boko Haram an Islamic terrorist group responsible for a lot of
devastation, catastrophe and abductions that claimed the lives of many.

Relying on the Government to arrange for the release begs the question, what has the government done for various other abducted persons by the same sect especially Leah Sharibu an innocent girl who is still being held captive because of her faith along with lots of others. Would the case of the Reverend be different? would they feed him, accommodate him and send him back in one piece or would they at some
point force him to denounce his faith.

Well the Good Reverend accepted the will of God should anything happen in the video message he sent to his family and friends but if nothing is done about this happenings and consistent abduction of Christians across the world on the basis their faith and believe, soon it would become a norm like in the book of

Acts 12 from verse 1 to 5  1. About that time, King Heroda reached out to harm some who belonged to the church. 2. He had James, the brother of John, put to death with the sword. 3.  And seeing that this pleased the Jews, Herod proceeded to seize Peter during the Feast of Unleavened Bread.  4.  He arrested him and put him in prison, handing him over to be guarded by four squads of four soldiers each. Herod intended to bring him out to the people after the Passover. 5 So Peter was kept in prison, but the church was fervently praying to God for him.

The church has got to stand together and speak out in one voice against this mayhem befalling her. The enemies of the church are becoming more powerful, sophisticated, weaponized, digitally sound and technical but the church is becoming more prayerless, more focused on mundane things and more divided by the minute.

The enemies of the church are united by one cause, “HATRED FOR THE CHURCH”. The Church is un-united by ideologies and doctrines. lets not forget it was the unity of the church that saved peter from the hands of the enemy of the church Heroda. The bible said they prayed.
Don’t say it does not affect me or my church is too big and secure for persecution to reach me. Lets be Our brothers keeper and fight for Rev Lawan Andimi.